Vacheron Constantin's Patrimony Contemporaine was introduced in 2004 and quickly become an iconic design for the brand. With it Vacheron Constantin implicitly acknowledged that the large watch trend was here to stay. The 40 mm diameter made it feel dramatically larger than Vacheron Constantin's previous generation of dress watches, the Malte Grande Classique and the Patrimony Small Seconds, with respective diameters of 36 mm and 35 mm. The slim bezel of the three-part 18K gold case gave plenty of room for a large dial, which effectively gives the watch an even larger appearance. 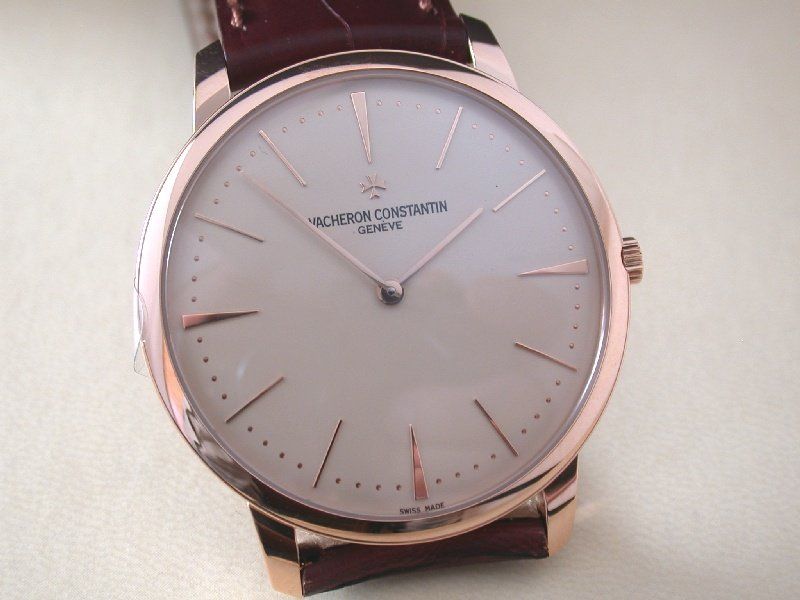 The designers at VC had the confidence to let the dial have a lot of open space, choosing to keep things simple (no guilloche, no excessive writing, no use of multiple finishes) and elegant, but by no means boring.

This first Patrimony Contemporaine model, reference 81180, which would later be joined by other watches with the same design motifs, is a manual winding watch that indicates only the hours and minutes with baton hands. Inside is Vacheron Constantin's in-house caliber 1400. With the movement having only a 20 mm diameter, the choice of a solid case back was wise, and also allows plenty of space for a custom engraving if desired. It is currently offered in yellow, white, and rose gold, as well as in platinum. Just this year Vacheron Constantin distinguished the platinum cased watches by pairing them with attractive grey dials: 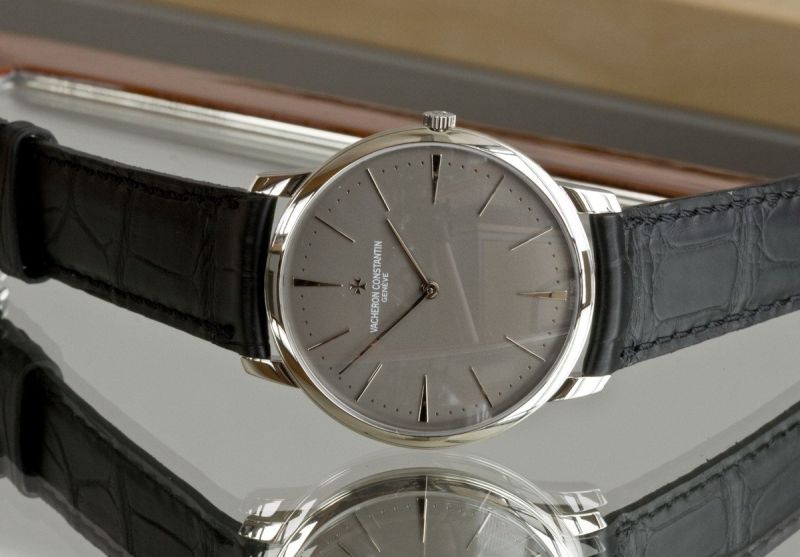 Two versions of the manual winding Patrimony Contemporaine deserve special attention. First is the inaugural Excellence Platine edition, from 2006, which was limited to 150 timepieces and, like all Excellence Platine watches, has a micro-grain finish platinum dial. 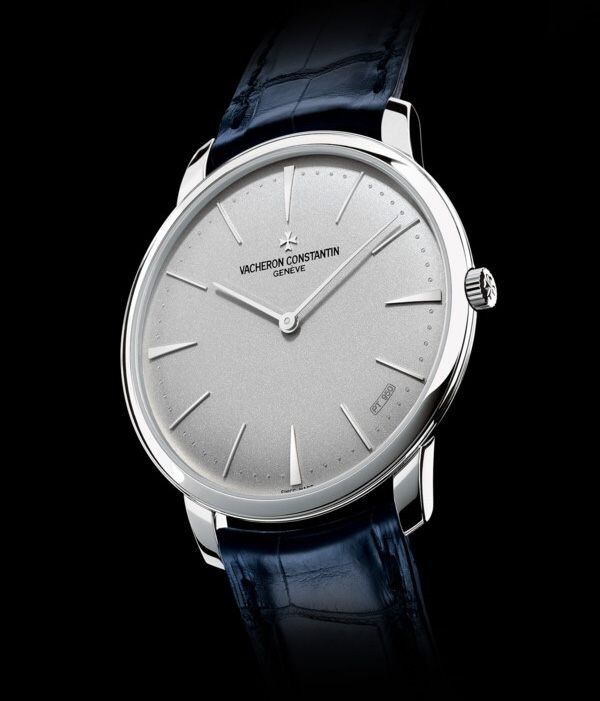 The second is the Boutique edition watch in rose gold with black dial, available exclusively at Vacheron Constantin boutiques worldwide. 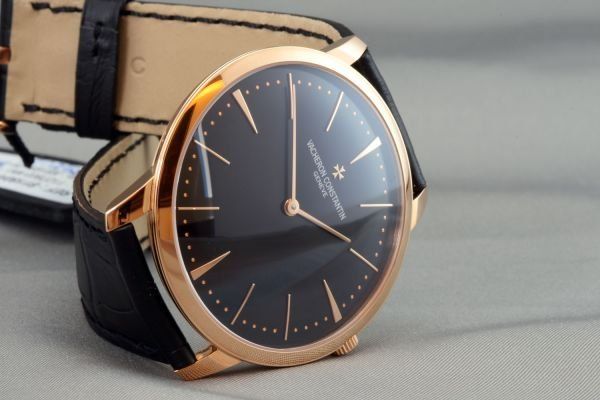 In 2007 Vacheron Constantin added a pair of automatic watches to the Patrimony Contemporaine line, one with guichet date at six, reference 85180, and one without the date, reference 86180, which has been retired this year. 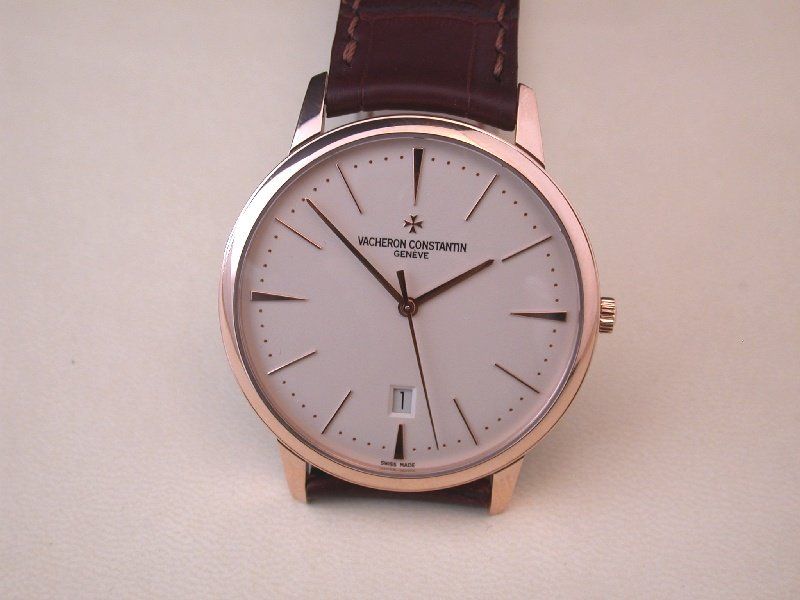 The reference 85180 uses Vacheron Constantin’s in-house automatic caliber 2450, which adds central sweeping seconds to the design. The case is thicker than the manual winding watch, and has a sapphire crystal case back to showcase the fine finishing of the caliber 2450, which has earned the Geneva Hallmark. The date window at 6 o’clock maintains the elegant symmetry of the dial. This watch is offered in yellow, rose, and white gold, and is also available in rose gold with the black dial at Vacheron Constantin boutiques. 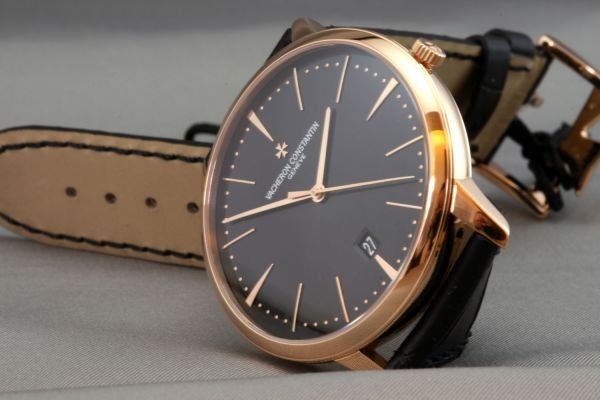 While Vacheron Constantin won’t release production information, I feel certain that these two Patrimony Contemporaine references are the two best selling models in production. There is nothing distracting or pretentious in these watches; they are everything a beautiful timepiece should be, and nothing more.  Their beauty is simple and organic, epitomizing the timeless elegance and impeccable craftsmanship for which Vacheron Constantin is held in such high regard.

By: WHL : October 26th, 2010-11:17
Vacheron Constantin's Patrimony Contemporaine was introduced in 2004 and quickly become an iconic design for the brand. With it Vacheron Constantin implicitly acknowledged that the large watch trend was here to stay. The 40 mm diameter made it feel dramat...
login to reply

The 2 manual wind Patrimony in platinum, and specially the Excellence platinum ...

By: amanico : October 26th, 2010-11:23
Were watches I considered for a long time. Top class, and I like the fact that the case back is solid, because of the reason you mentionned, which seems to be the identical reason which leaded PP to do the same with their 5196P, which seems to be the VC P...
login to reply

Nicolas, funny that I too considered...

Well, I guess these are 2 unavoidable contenders. :)

An enamel dial Patrimony would be beautiful!

By: WHL : November 2nd, 2010-10:33
Something like Breguet's 5177. I suppose VC would then tell you to buy the Chornometer Royal 1907! The only downside with enamel is that they would then have to enamel or print the numbers on the dial, rather than the current applied markers, which have t...
login to reply

By: Hororgasm : October 30th, 2010-10:49
I was also thinking of the patek slate gray found in their platinum versions. Had the 5056p which was sold and replaced with the 5960p. Been fan of the slate gray since the earth cooled. The VC platine have a vaster expense of the grey dial, versus the pa...
login to reply

So, did you put anything in your goodie bag this past weekend?

By: Hororgasm : November 3rd, 2010-07:28
Will try this weekend. I actually got something fm VC few weeks back that has similar slate grey hues, will post it soon, together with a patek something with a slate grey hue too...now I need a grey dial AP....
login to reply

I'm guessing you got one of the SS/Ti Overseas!

Thank you for reading Nicolas....

The manual winding are so elegant...

By: moc : October 26th, 2010-14:07
and feeling very drawn to a classic slim dress little number,I must say that the excellence Platine and the boutique edition are strong contendants. They are so elegant and pure ,and the 40mm give an extra touch of modernity I must say. Mo
login to reply

By: WHL : November 2nd, 2010-10:47
As much as I like the watches that exhibit bold design choices (eg: Quai de l'Ile), I also appreciate and admire those watches whose underlying simplicity and elegance are their chief design ethic. To experience watches in all their myriad diversity is wh...
login to reply

Well, Bill another topic of which I am very fond.

By: respo : October 26th, 2010-14:34
I love the Contemporaine line, particularly ref. 81180. It is pure elegance. Funny what you said about VC's acknowledgement that the large watch trend was here to stay as there is a thread about this topic on the HoMe Forum right now. That platinum versio...
login to reply

Thanks for the information, Bill, and for following up. [nt]

Thank you for reading. nt

By: jschen888 : October 27th, 2010-16:35
I love how the Excellence Platine variant looks. So simple, yet so spectacular. Did they already start using the platinum thread for the strap in this inaugural model?
login to reply

I do not believe that they used platinum thread in this watch. nt

By: Kazumi : October 28th, 2010-20:55
Thank you for another interesting post, Bill. It took me a long time (years) to warm up to the Contemporaine, primarily because of the 40mm case and the great expanse of dial. However, I did eventually learn to appreciate the simple but elegant design. Th...
login to reply

By: WHL : November 2nd, 2010-10:58
Thank you for sharing your thoughts on the Patrimony line. I am very much looking forward to the opening of the VC boutique here in the US (some time in 2011) so that I can finally spend some time with these boutique edition watches. Bill
login to reply

By: WHL : November 2nd, 2010-11:06
I love winding the 1400 caliber. The feel is tops of all the watches from all the brands, with the Breguet Tradition coming in a close second place. Bill
login to reply