An insight into the different Lange L951 Calibres

This long-winded commentary is based on my observation and research on the various Lange L951 calibres that exist today. By the end of this writing, I hope I could cover the different incremental changes Lange has done to the chronograph calibre and ways to distinguish between the Lange Chronograph watches.

Back to basics. The L951 is Lange's renowned chronograph calibre which first manifested as the Datograph in 1999 as the L951.1. As we know from Lange's calibre numbering system, the "95" means the movement started development in 1995 while the "1" refers to the first movement made in that year. ".1" which follows after means the first revision of the movement and are reserved for minor or incremental changes.

The L951.1 is a horizontal clutch chronograph, column wheel, instantaneous jumping minutes and a big-date. What followed is the release of the 1815 Chronograph in 2004 which is essentially the same movement, without a bigdate. Strangely, this movement is designated as L951.0. If it was developed and came after the Datograph, it should have been called the L951.2. Or, it should have been given a new movement number altogether like the L952 or L953 without the bigdate. Perhaps Lange wanted to state that the Datograph is the more "complete" movement with the bigdate, but at its core not that much different to the 1815 Chrono?

However, things are not that simple and there are various changes around the base chronograph movement. If you were to take movement photos of the Datograph and the 1815 Chrono (without the case pushers), it may be difficult to distinguish between the subtle differences of the movements. Even more confusing is the newer incremental changes of newer revisions - we have the "Datograph V2" we know as the Datograph Up/Down with the L951.6, and the 2nd generation 1815 Chronograph with the L951.5.

Again, all these calibres at its core are the same L951 with subtle differences between them. By inspecting just the movement alone, it is possible to identify the different revisions of the movement. A summarised table is as follows:

In a nutshell, there are four visible distinguishing features that were subtly upgraded by Lange over time which appears in later revisions. They are as follows:

The exception here is the first Datograph, the L951.1 (on the left). The key difference here is the lever spring; the old L951 has the spring mounted on the chronograph baseplate which pushes a pin on the start/stop lever. The revised lever mounts the lever spring on the lever itself, which acts against a pin now on the baseplate. Both baseplates and levers are subtly different and therefore not 100% interchangeable with each other. 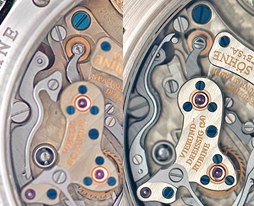 (Images from WatchesBySJX) Old lever on left, updated on right.

My theory (as I have yet the opportunity to handle both side by side) would be the longer and more slender revised lever spring means it requires slightly less force to push, provided the lever springs are treated as the same steel. I can’t comment on the reliability improvements, but the revised lever may also be an aesthetic decision by Lange as the spring more coherently follows the shape of the chronograph pusher lever.

As an unrelated note, it is worth mentioning the overlooked jewel on the bottom left of the pictures. This is the jeweled pivot that Lange uses for their chronographs, which means a smooth and low friction operation that contributes to the buttery smooth actuation that Lange owners claim.

This is one of the more subtle newer features that isn’t talked about much that I’d like to try explain in more detail. To my knowledge, as of this writing only the L951.6 of the Datograph Up/Down (right picture) incorporates this feature. 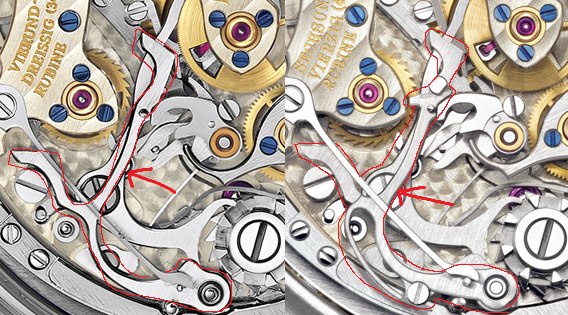 However, a flyback chronograph does it differently. This tab does not exist; so the chronograph can be resetted regardless of whatever position the column wheel is in (this is the quickest way to identify if a chronograph is a flyback from glancing at the movement). When you push the reset pusher on a flyback like the Lange, you are using the force of pushing the pusher to move the reset lever to slam into the heartcams. This gives one subtle difference between a standard chronograph and a flyback – in theory, start/stopping a flyback chronograph would need less force as the column wheel does not have the resistance of cocking the reset lever anymore. That work is now done by the reset pusher which conversely in theory may need more force on a flyback.

To simplify quickly, most Lange L951 has direct reset lever actuation. When you push the reset lever, you are directly forcing the reset lever into the heartcam. The revised L951.6 on the other hand, has an indirect reset lever; there are two layers of levers. Both are coupled via an extra C-shaped lever spring as seen in the right picture. This acts as a “buffer” spring between the levers when resetting. My theory on this is twofold- one, the spring acts as a shock absorber to dampen any minute vibrations from the slamming of the reset hammer into heartcam, ensuring no shakiness during resetting. Two (which should not happen), it gives leeway should the pusher be pressed too hard, allowing some flex and preventing the lever from bending and getting damaged from overexerted force. To hold both levers from misalignment, there is a stub on the bottom lever that keeps both levers parallel to each other. 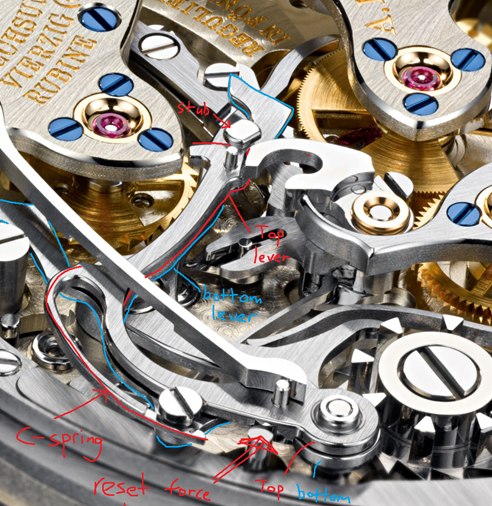 This is not visible via the movement, but the L951.5 and L951.6 (2nd gen Datograph and 1815 Chronograph) have an extended 60 hours power reserve mainspring barrel. Interesting to note is that the Double Split and Datograph Perpetual has 38 and 36 hours reserve respectively, which implies also a bigger mainspring barrel (due to more power needed for the rattrapante and perpetual calendar complications which induce more friction/resistance).

The most notable difference that could be seen on different L951 calibres is the balance wheel setup. The old L951s (to the left) uses the traditional balance wheel with timing screws on the circumference, and is using a swan-neck regulator setup. Meanwhile, the newer calibres uses Lange in-house balance wheel with 6 eccentric weights for poising (ala Patek’s Gyromax), and is freesprung. By turning the weights, the amount of mass can be controlled closer outward or inward radially which increases or reduces the moment of inertia of the balance wheel – therefore finely adjusting the rate of the freesprung without a regulator. In this case, the swan-neck is strictly not a regulator – but is aesthetically similar and just positions the start of the freesprung hairspring. Most newer L951 calibres and derivatives (2nd gens, Dato perpetual, Double Split) uses the inhouse balance.

On the movement side next to the balance wheel, there is a subtle difference between the 1815 Chronographs and the Datograph. Namely, there is a small gap whereby a pin for the date pusher is visible. This is obviously not needed on the 1815 Chronograph, and therefore is covered by a slightly different bridge. This makes the baseplates of the 1815 Chronograph and Datograph not 100% interchangeable. Note that the Datograph Perpetual being a Perpetual Calendar, would have a more complex lever arrangement so therefore has a subtly different datepusher cutout on the movement side.

With all that in mind, let’s try identify the movements.. (images from SJX and Schileo, PuristSPro) 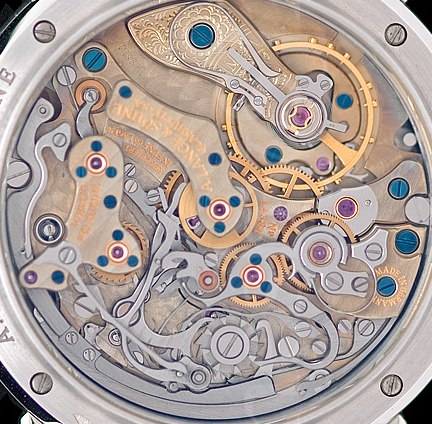 Next. Balance wheel is screwed implying an older L951, but does not have date pusher pin. Therefore it can be concluded as the first gen 1815 Chronograph, L951.0. Chronograph start/stop spring updated, standard reset lever, swan-neck regulator. 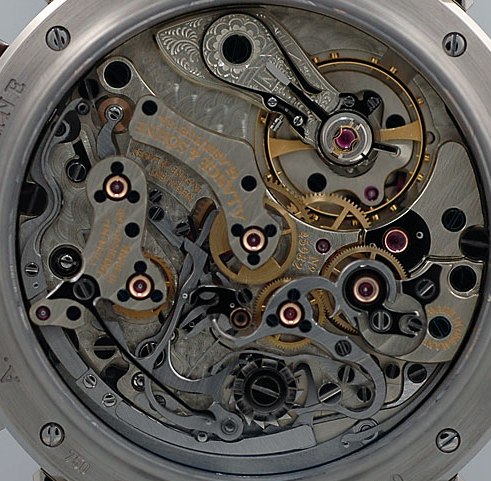 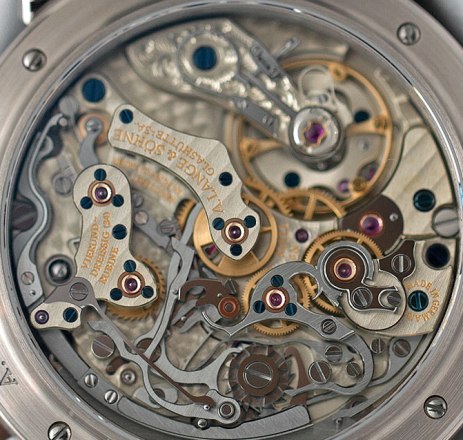 For the next one, note the updated reset lever. This immediately points it to be the Datograph Up/Down, L951.6 as no other Lange currently uses this. Updated chronograph start/stop lever spring, date pusher pin visible, in-house balance wheel with freesprung hairspring. This is probably the most evolved and most refined iteration (rightly so, being the latest revision) of the base L951 calibre. 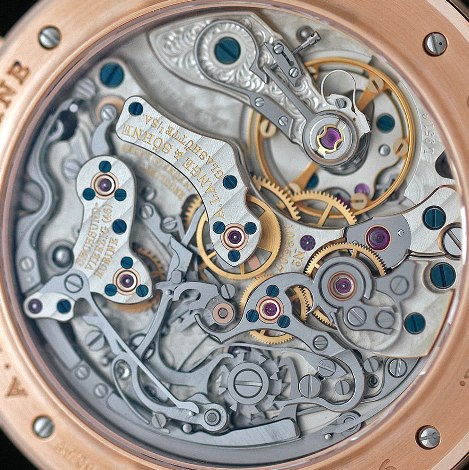 One more for good measure. This has the free-sprung hairspring and in-house balance wheel, updated chronograph start/stop lever spring, standard reset lever. However, note the date pusher area next to the balance wheel being non-standard; this singles it out as the Datograph Perpetual L952.1. 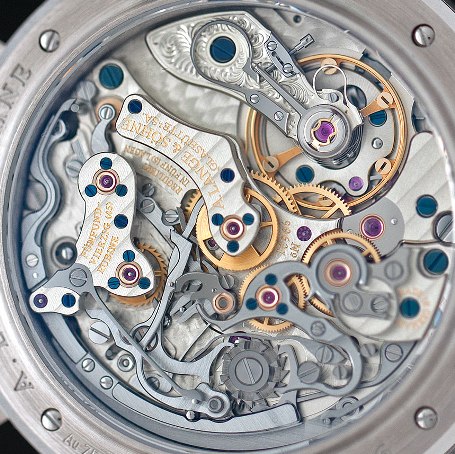 Phew. That took a little longer to write than I thought! Note that this covers the visible changes and revisions on the movement; some are not visible (like added end-jewels, etc.) and are beyond my knowledge. Anyway, thanks for reading!

An insight into the different Lange L951 Calibres

By: skyeriding : December 11th, 2015-10:46
Hello, This long-winded commentary is based on my observation and research on the various Lange L951 calibres that exist today. By the end of this writing, I hope I could cover the different incremental changes Lange has done to the chronograph calibre an...
login to reply

Thanks a lot for this excellent article Skyeriding!

By: foversta : December 11th, 2015-13:53
I would like to make two remarks. 1) I'm not sure that the DS is based on the L951: it may share of course some elements but the frequency is not the same 2) for me the increase of the power reserve was due more to the removal of a maltese cross rather th...
login to reply

Thanks for the comments foversta,

By: skyeriding : December 11th, 2015-17:16
1) This is something I overlooked. It's quite easy to get lost in the chronograph module on the displayback side, I forget there is still another layer of movement for the timekeeping side! I'd like to at least back up my claims however, that the chronogr...
login to reply

By: smartbot : December 11th, 2015-20:53
Excellent review. Now I feel a bit more knowledgable about the 1815 Chrono movement. Thanks for posting!
login to reply

By: skyeriding : December 11th, 2015-23:12
I remember oogling over your HD vids of the 1815 Chrono. Simply beautiful! Regards, skyeriding
login to reply

By: heartbreaker : December 11th, 2015-23:14
You made me remind that the fascination coming from the watches' mechanics was the thing that put me in this passion, when I was only a little boy. Thank you, I'm looking forward for other articles from you! Ciao, Elio
login to reply

By: skyeriding : December 12th, 2015-01:24
I have written previous articles before (which I won't link here) but did not post them on this forum. They are related to my fascination with chronographs and rattrapantes... Regards, skyeriding
login to reply

By: skyeriding : December 12th, 2015-01:21
I did more searching online and realised a couple photos that contradicts my findings. Eg there are some old official Lange Calibre photos of the L951.1 that show updated chrono spring levers, or L952.1 that hasn't been updated. However, from actual photo...
login to reply

Thanks for taking the time to post this. [nt]